The Fairies of
Merlin's Craig

Fergus stepped back in shock, this tiny creature just spoke and what more as it drew nearer, he could see it resembled a tiny human in flight. It was then her remembered a warning his mother had once told him. 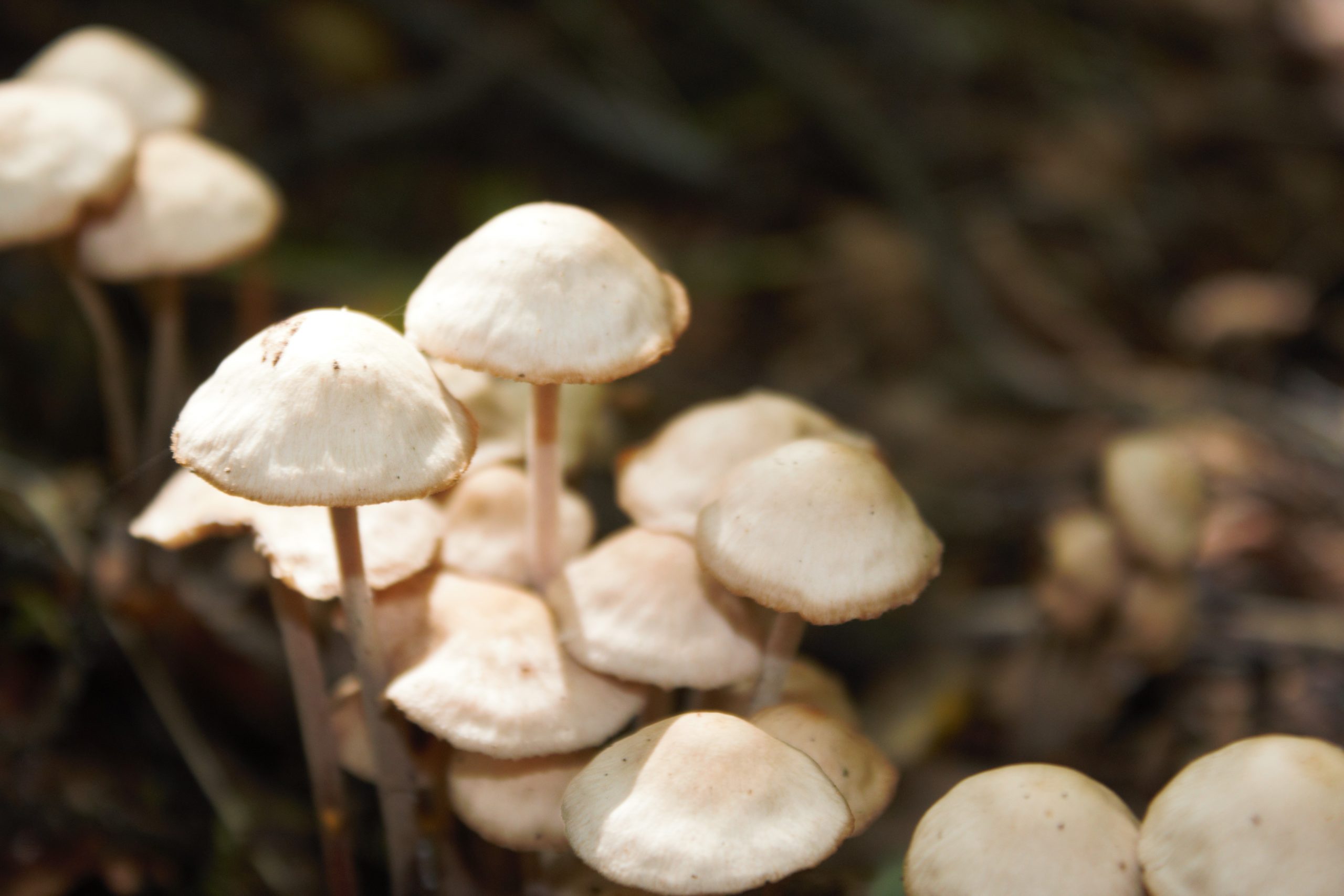 It was a cold and misty day on the moors. You could barely see a few feet in front of you, yet one weary farm labourer was still working at his toil. His master, the farmer, was not an unkind man but when living in such desolate place if you didn’t work you didn’t eat. Around lunch time, or so the vague glow of the sun through the mist seemed to indicate, a voice called through the mist.

“Fergus! We’ve only got a few days until our peat stores run out and it could take a week to dry in this damp. Go out to Merlin’s Craig and fetch us some.”

“Aye master, I shall return before sundown with fuel a plenty”

And so Fergus set off to trek across the moor with a shovel in one hand and the trusty farm pony being led by the other. After a time, he arrived at Merlin’s Craig. His ability to navigate the moors to get there was a testament to his years making the journey. He was in a different area to where he normally would dig but in this weather, the fact he was there at all was good enough.

Upon striking the earth the mist began to clear a little which he found to be odd but he continued nevertheless. However, upon the second plunge of his shovel a tiny creature appeared before him. Dressed in green and just over a foot tall, the creature flew about him as though angered by his presence. Then it spoke:

“How dare you set upon my roof with your tools of destruction! How should you like if I were to lift the roof from your house?”

Fergus stepped back in shock, this tiny creature just spoke and what more as it drew nearer, he could see it resembled a tiny human in flight. It was then her remembered a warning his mother had once told him.

“when out alone, watch what you do on green mounds, hills with whispers and sounds, beware of places where legends run riot for there lie the fae. Fairies come in many shapes and sizes. Some are grotesque creatures, others are beings that possess with their beauty, some are goblins and some of elves, but all are something unworldly. Do not upset them unduly for they are great tricksters and have led many a man astray.”

This creature was truly otherworldly and as the fog cleared he noticed that he was on an untouched part of the craig, a green and rounded part. It became apparent to him that this creature was of the fae.

She faced him once more in anger “Leave here, never to return”

And so Fergus departed empty handed but thankful that the fairy had allowed him to leave without any of the fearful punishments his mother had mentioned. As he approached the farm the farmer came out to help him unload the pony but when he arrived to greet Fergus the pony was unburdened.

“Where is the peat, lad? I told you to bring peat. You have been away hours yet return to me empty handed!”

Fergus faced his master with eyes filled with shame and recounted his tale “I am sorry master but upon finding a spot and beginning to dig upon the craig a creature, a fairy, appeared to me and warned me from taking her peat. My mother had warned me of such creatures and so I return to you with a heavy heart for I have failed you.”

“Then do not fail me twice!” cried the farmer.

“Go back and bring the peat for the fire” he handed the pony’s ropes back to Fergus and pointed towards Merlin’s Craig.

“Nonsense, it is but an old wife’s tale and even if there was some creature it was but over a foot tall. It hardly sounds like a creature to fear.” Seeing the obvious fear of the young man the farmer faltered a little in his scolding.

“You shall rest here the night and set off at first light.”

Fergus looked thankful, albeit still nervous about what he may face the next day. He retired to his bed after putting the pony for some well-earned feed.

The next morning at first light Fergus set off once again, shovel in one hand and pony in the other. The farmer stood at the door and waved him off:

“If you aren’t back by sundown, I will assume the fairy took you” he scoffed.

Fergus went back to the same spot and began once again to dig and after taking out the first block, he waited, but nothing happened. He continued to work throughout the day and returned at nightfall with the pony leaden with peat. The farmer, delighted, stated “no bother with the fairies this time then.”

“Not at all,” Fergus said with a grin, feeling somewhat foolish for his antics the previous night. Of course he imagined it, the moors did strange things to a mans mind, especially when cloaked in mist. Fergus went back to the craig for the next week until the farms stores were plentiful and Fergus had all but forgotten of the odd happenings on that first afternoon.

A year passed and the labourer had not seen nor heard of any fantastical creature and had put to bed the matter as a tired minds trick. The crops had grown well the animals were healthy and his wife and children were well and, the children now 4 and 6, looked as strong and healthy as any a Lairds child. He finished his work on the anniversary of that supernatural day and upon departing for his home was passed a pitcher of milk by the farmer for his lovely wife. He set about his way and went via the craig.

Upon approaching the craig, he heard some commotion and as he reached the top of the ridge he saw before him a great celebration of fairies but upon his arrival all went silent and they turned to him. Then, as though from nowhere, a beautiful woman stepped out from behind a rock. She was the most stunning women he had seen in his entire life. Her beauty shocked him so much that he froze to the spot. She reached out a hand to him and said softly, yet regally:

“Would you care to dance?”

In that instance the labourer forgot all about his wife and children and as he took her hand and danced into the night he forgot about his work, the animals that would need fed come morning, his duties at home and all he saw was her, all he thought was his next step and all he heard was the music.

As the sun rose, the music came to an abrupt end. Fergus began to snap out of the trance like state he had been in all night but just as he turned to leave the fairies grabbed him and dragged him through the cracks in the rocks into their lair and sealed him in. The beautiful women resumed her form as one of the fairies and they went about their tasks.

“What is happening? Where am I?” cried out Fergus in a sudden panic.

The fairy who had just moment ago been a beautiful woman turned to him and said:

“You stole our roof, you knew what could happen but you carried on regardless and now we shall enact our justice.”

Fergus now trembling stated “What do you intend to do to me?”

The fairies laughed in unison and the one that had previously spoken spoke:

“No more and no less than you deserve” and from that the matter was closed.

Fergus watched as the fairies went about their business. They sewed and weaved items of magic imbued with charms. They crafted weird and wonderful concoctions and wrote tombs that would be seen by no eyes other than their own. Some could even be seen scrawling hexes and curses on scraps of papers. After what felt like a day, Fergus began to relax. He thought to himself whatever they are going to do to me doesn’t seem to be coming any time soon. But just as that thought crossed his mind he was thrust out from lair and the hill sealed behind him. He stood alone in the open evening air, or so he thought. Then he heard a voice.

“Your punishment has been fulfilled, our roof has regrown and has once again been covered in greenery. You are free from us but never tell another mortal being of our business and never touch our roof again.”

Then she vanished. Fergus turned around to see if any other creature had ideas in store for him but to his happy surprise there was none. He then collected his thoughts and headed for home.

Upon opening the door to his house, he heard a might crash. His wife had just dropped the dinner pot.

“Sorry I couldn’t make it home last night, dear. I have the strangest story. Let me help you with that first though”

She stared blankly at him as though she had just seen a ghost and as he looked back at her he noticed her hair had changed, her face had gained a wrinkle or two- she looked older. Then as Fergus was about to speak again two children walked in, one looked as though she may be around 10 while the other was age enough to have started working on the farm.

“You have been gone 7 years and now you waltz in through the door as though you were never away. You abandoned us, walked out without a word of warning. We have struggled, we nearly lost everything many times over. Why did you leave and why are you back?”

Fergus tried to explain his tale to his wife but he gained quite quickly how mad his tale sounded and how much he was asking of his family to accept the tale. What’s more, if you got rid of the fairies it sounded like he ran off with another woman. Fergus insisted upon his story and while his wife did not believe him initially, nor did she ever full believe it, the family were slowly brought back together again. The farmer, knowing of the first issue with the fairly was inclined to believe Fergus and regardless he had always been a good worker and would not turn him away. Over time,  Fergus gained back the trust of his family and the farmer and never again set foot on Merlin’s Craig.

The Swan of Loch Sunart

The Battle of the Birds

Close Menu
We use cookies to ensure that we give you the best experience on our website. If you continue to use this site we will assume that you are happy with it.OkNecessary onlyPrivacy policy